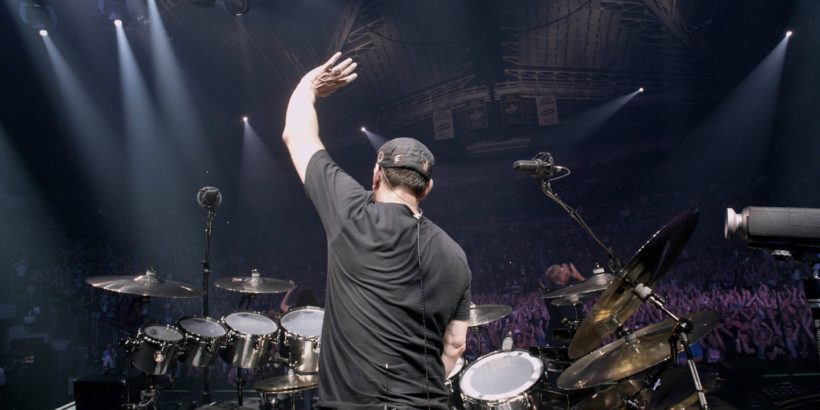 Hi everybody. I originally wrote this message and sent it to Celso, Tim and Yarin, my friends and fellow World Prog-Nation administrators to privately share my thoughts on the passing of the legendary Neil Peart. I wrote this in one sitting, letting the thoughts flow, and it was not meant for public consumption, however they encouraged me to share it with everyone since my words might resonate with some of you. This is not the normal tribute in the sense that it lacks biographical details, dates, causes and factoids (I think Neil wasn’t into that kind of stuff either) 🙂 . Here is my tribute to Neil:

—
I haven’t been able to say much these past couple of days. I’m still all choked up and am getting all teary eyed at times. I didn’t think it could get worse as far as me feeling crappy after several of our musical heroes have prematurely passed in recent times, but this is somehow worse. I don’t presume to know anything, but this past week was pretty Rush-heavy for me starting last weekend as I prepared for the anniversary of A Show Of Hands. I listened to that, and much more. As I listened to ASOH, which has songs up to the Hold Your Fire album, I told myself as a sort of joke, that this year I was only going to listen to the studio albums from Presto on so I’d know them as well as all the previous studio albums, knowing full well I couldn’t go a year without the other albums! I also thought that I should buy Neil’s books because I have none, and that inspired me to post the Neil in motorcycle getup picture. I took my R40 Best Buy package to look at the stuff and watch a few songs including “Working Man” and smiled huge when Neil took a bow at the end… and then this happens.

I was thinking about why it’s hit me so hard, and basically Tim put it very eloquently in his Facebook post. Like him, I come from an era where Rush was an extremely popular “underground” band and got heavily listened to. A lot of the kids from when I was in middle school, through the high school seniors were into Rush. Not everybody obviously, but definitely those with a musical inclination, those literary geeks and those who were a bit disenfranchised. They all liked Rush. I happened to be in all those categories. Rush were our “uncool” cool older friends whom we admired and were proud of because they were so talented. The most popular member was of course Neil, the drum prodigy and erudite lyricist, and of course his drum solos were the stuff of legend and conversation. The conversation would then would turn into which were our favorite albums and tours. With the closest friends, the conversation would deepen and we would discuss lyrics, why you liked them and what they meant. Neil’s lyrics were (are) so meaningful, I even asked a girl to prom by giving her a card with my handwritten lyrics to “Madrigal” (she said no!) 🙂 Back then Rush concert videos were scarce and expensive, so when anyone got one, or whenever the local access TV channel played a concert during their late night Saturday programming, we were all there to watch it, trying to air drum to Neil’s parts.  Rush was an integral and organic part of my formative musical years and my life.

It’s kind of a badge of honor to have seen Rush in concert “back then” (mine was the Power Windows tour), and a source of silent pride to see how they became even bigger as more people got what we knew since we were kids. Unlike other older Prog bands that I discovered around that time, and who are super important to me, for most of them, their heyday was long gone, so my life experience with those bands wasn’t as intense as it was with Rush whose star was shining bright.  Perhaps that’s why Neil’s death hurts more.

Did you guys read Rod Morgentein’s thoughts on Neil’s passing? Here it is:

Neil Peart was a Renaissance man. Most of us know him as the iconic drummer and lyricist of Rush. But beyond his exceptional talents in the world of music, Neil’s zest for life, thirst for knowledge, and quest for adventure led him down many paths.

I had the honor and pleasure of meeting Neil in 1985, when The Steve Morse Band toured with Rush as their opening act on the band’s Power Windows Tour. Most touring musicians will attest to the absolute joy and excitement of bringing their music to audiences around the globe. Most of these same musicians will also agree on the physical and emotional toll that endless touring can take on a human being.

That said, a typical show day often consists of travel, sound checks, meet and greets, interviews, the performance, followed by more meet and greets. Well, as if this is not enough, a typical show day for Neil Peart on Rush’s ‘85/’86 ‘Power Windows Tour’ would usually begin in the wee hours of morning, as Neil would journey on his bicycle from the previous city (assuming said previous city was within 150 miles of the next gig). Neil would often be on his bike for hours, arriving in time for Rush’s sound check. Directly after sound check, he would have dinner, which was immediately followed by a one-hour conversational French language lesson with a local French-speaking tutor. Upon completing his French lesson, Neil would proceed to a private practice room and warm-up on a small drum kit prior to the band’s two-hour concert.

Neil Peart is the textbook definition of ‘Carpe Diem’. He truly seized every moment of life to engage in something of importance, be it music, reading, writing, philosophizing, bicycling, motorcycling, trekking through foreign lands, climbing the highest peaks, and devoting himself to family. He is a truly inspiring human being, whose breath of humanity has touched millions around the world.

I am forever grateful to have known this unique and special man.

Rod’s tribute was the first one to give me some kind of comfort because, from the little I know about Neil’s personality, I find comfort in knowing that whatever his last days were like, whatever he knew and when, and however he chose to spend his time, the man lived his life to the fullest, with all its highs and lows, on his terms. I like that.

Anyway, thanks for letting me vent and babble. I actually feel a lot better now. I know that there are terrible things happening in the world, but the loss of a beautiful being who brought joy to millions around the whole freaking world is something to be mourned for a time, and his legacy must be cherished forever.