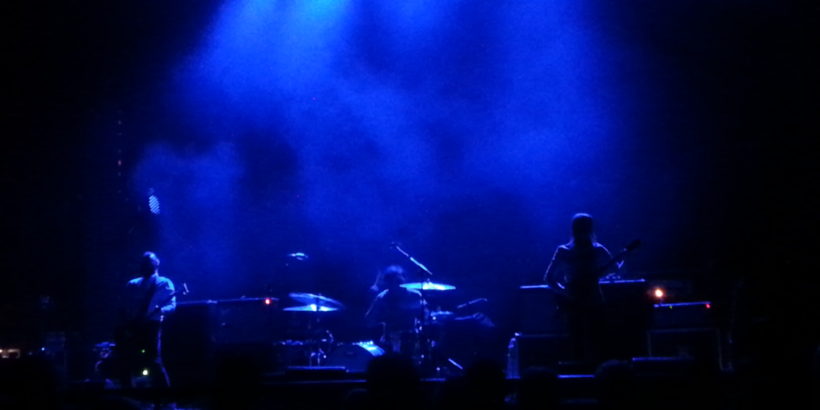 World Prog-Nation’s concert warrior Chris Pritchett went to see Russian Circles, Eagles of Death Metal, and Mastodon last week. Here are the thoughts on the venue as well as the show itself.
——
I got the chance this past Friday (September 29th) to travel about an hour and a half north to Knoxville, Tennessee to see three absolutely amazing bands play at the Knoxville Civic Auditorium. While I have rather mixed feelings on the venue, the show was absolutely mind-blowing! I’ll start from the beginning…

The venue itself isn’t the best for a metal concert, in my opinion. The Knoxville Civic Auditorium has permanent seating (while the other side of the venue is an open floor with a stage set up). This surprised me and my best friend, as we didn’t realize that was the case. We arrived hours early expecting to run across the floor to the barrier, and revel in the bruises one gets from being on the rail (alongside the usual hearing loss and strained vocal chords, naturally). Bright side to all of it, the seats we had were very good. The acoustics inside the auditorium were also phenomenal, but…I was kind of hoping for a mosh. Ah well. Note to self: never see a show there again unless it’s indie or something you do sit through. The entire venue stood up throughout the show despite. With plenty of us headbanging and dancing like fools. Or sending their glasses flying off their own faces and about two seats over, which I will explain in a little bit.

Now that the negativity is gone, let’s get down to business. The three bands in question. Russian Circles, Eagles of Death Metal, and my home state boys Mastodon!

Russian Circles, for those who haven’t heard of them before, is an ambient post-rock/metal group from Chicago, Illinois. Consisting of just three members, Mike Sullivan, Dave Turncrantz, and Brian Cook. With their powerful sound, you wouldn’t imagine it came from just three gentlemen on stage. They. Were. LOUD! I was warned ahead of time to bring ear plugs, and I did (some lovely hi-fi ones that didn’t dilute the sound, just knocked the decibels down a notch). It was the good kind of loud. The kind that surrounds you and draws you into the music. I’ll admit, I’m very much a newer fan of their music. I’ve only been listening to them for a few months now. Should these guys ever tour in my area again, you can bet money that I will be seeing them again. Especially if they are headlining. Their performance was back lit, setting the ambiance for their heavy riffs and thundering bass lines. Please. Check these guys out if you haven’t yet. You will not be disappointed. Nor will you be if you get the chance to see them. 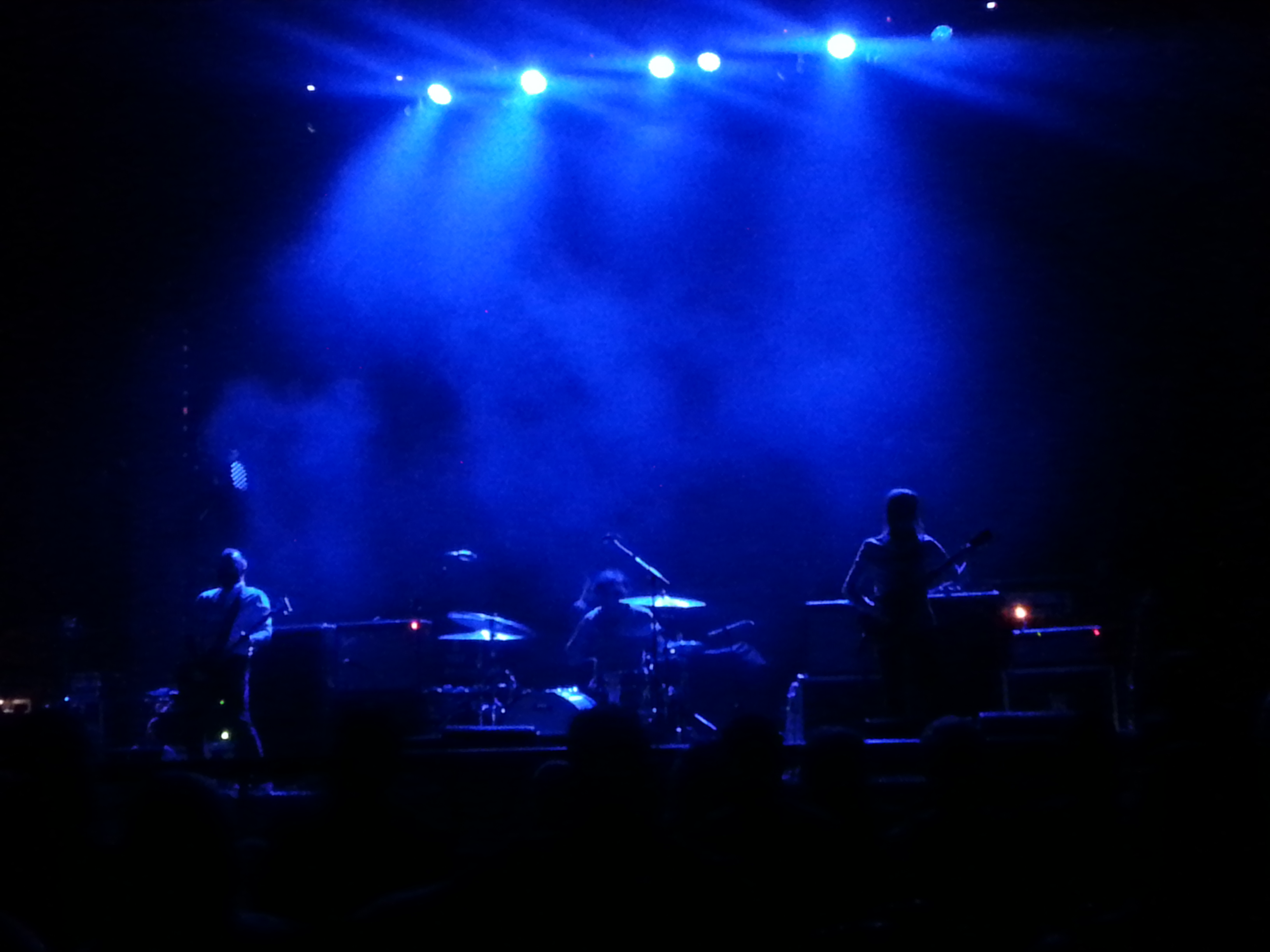 I know what you’re probably thinking right now. Eagles of Death Metal isn’t progressive. My response? Nope, but they are truly the patron saints of rock and roll. While Eagles of Death Metal consists of Jesse Hughes and Josh Homme (Queens of the Stone Age) on the albums mostly, the touring band currently consists of Jesse, Dave Catchings, Eden Galindo, Jennie Vee, and Jorma Vik. I’ve adored EoDM since high school, and have always wanted to see them live. Their fire and passion burns bright on stage. Brent Hinds (yes, from Mastodon), joined them on stage with his guitar for the first song. It’s fun, upbeat rock music. Jesse has a great stage presence, and his interactions with the crowd are some of the most humourous and best I have ever seen! Mr Boots Electric really knows how to shake it, and destroy guitar strings during a guitar duel with Dave. With newer tracks from the album Zipper Down (“Complexity”, “Silverlake”), and older tracks I jammed to in high school from Peace Love Death Metal (“Speak In Tongues”, “Whorehoppin'”) and Death By Sexy (“I Want You So Hard (Boy’s Bad News)”)…Yeah, high school me was screaming and dancing just as much as my current self was. I lost my glasses during this set. No idea how I knocked them off my own face, but I did. That is the sign of a good time! Yes, I did find them. They lived to help me see another day. 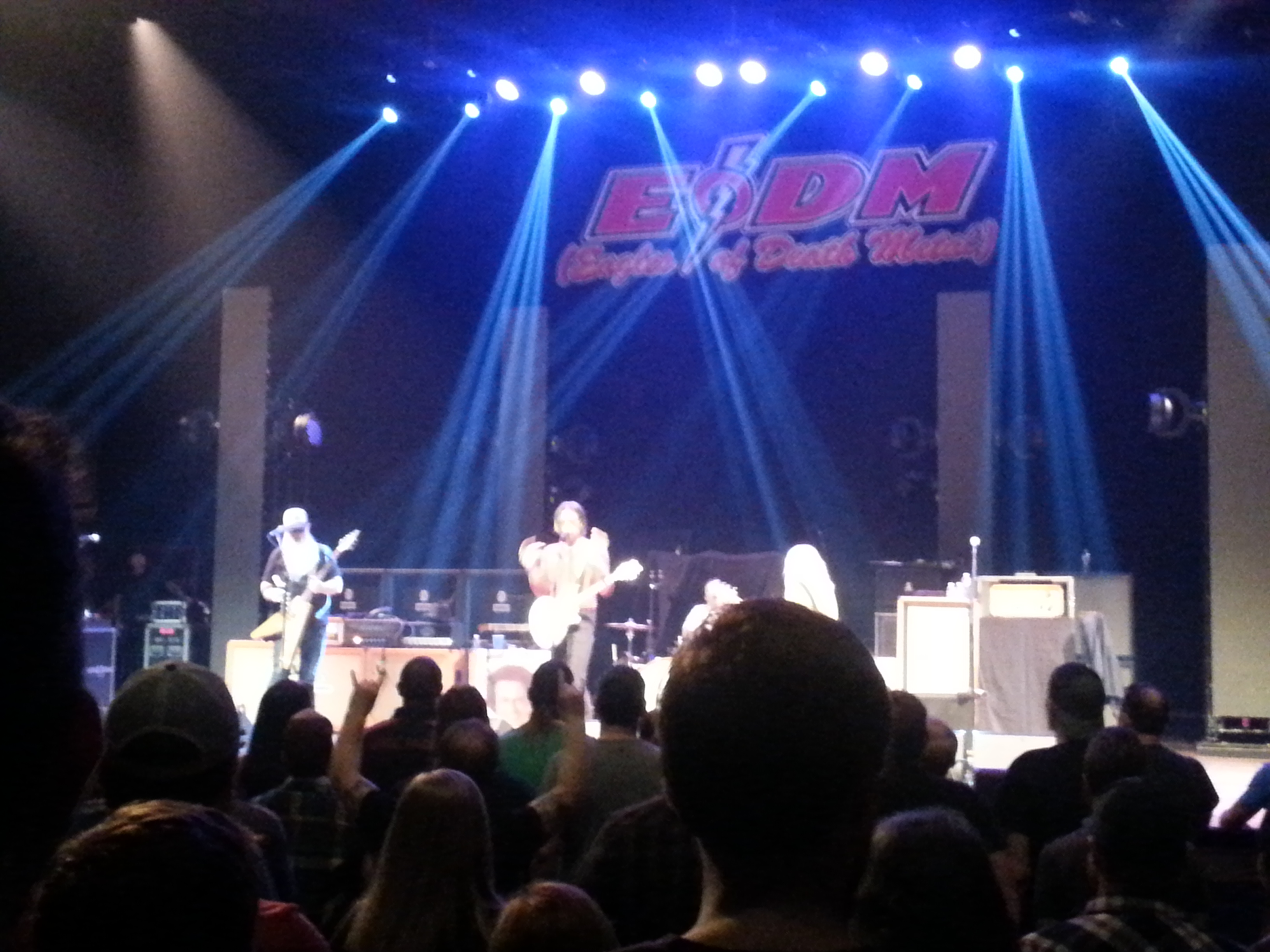 Now, for the progressive metal band you’ve all been waiting for. Four talented gentlemen from Atlanta, Georgia. Mastodon! While I had heard of them in high school as well (Blood Mountain-era, just to date myself), I never really gave them a listen until their latest album Emperor of Sand came out earlier this year. If I hadn’t gone back to listen to their back catalogue before, I surely would have now. These guys were wonderful on stage! Opening with the thirteen minute long track “The Last Baron” from Crack the Skye, it was perhaps the best introduction into their section of the night. Followed by the first track from Emperor of Sand, “Sultan’s Curse”. All my personal favourites were heard. From “Black Tongue” (The Hunter) to “Colony of Birchmen” (Blood Mountain). “Show Yourself”, which translates beautifully live, and of course “Steambreather” (both from Emperor of Sand). They left me without a voice, and a proper ache in my neck and shoulders from headbanging. Sadly, with their latest EP Cold Dark Place as new as it is, we didn’t hear anything from it. Perhaps the next tour, but I’m perfectly happy and still with a messed up voice from their set! As for the visuals, the band was back lit for a good portion of the show, with a number of LED screens behind them. Trippy visuals moving across them with familiar images from covers of “Once More ‘Round The Sun” and “Emperor of Sand”. 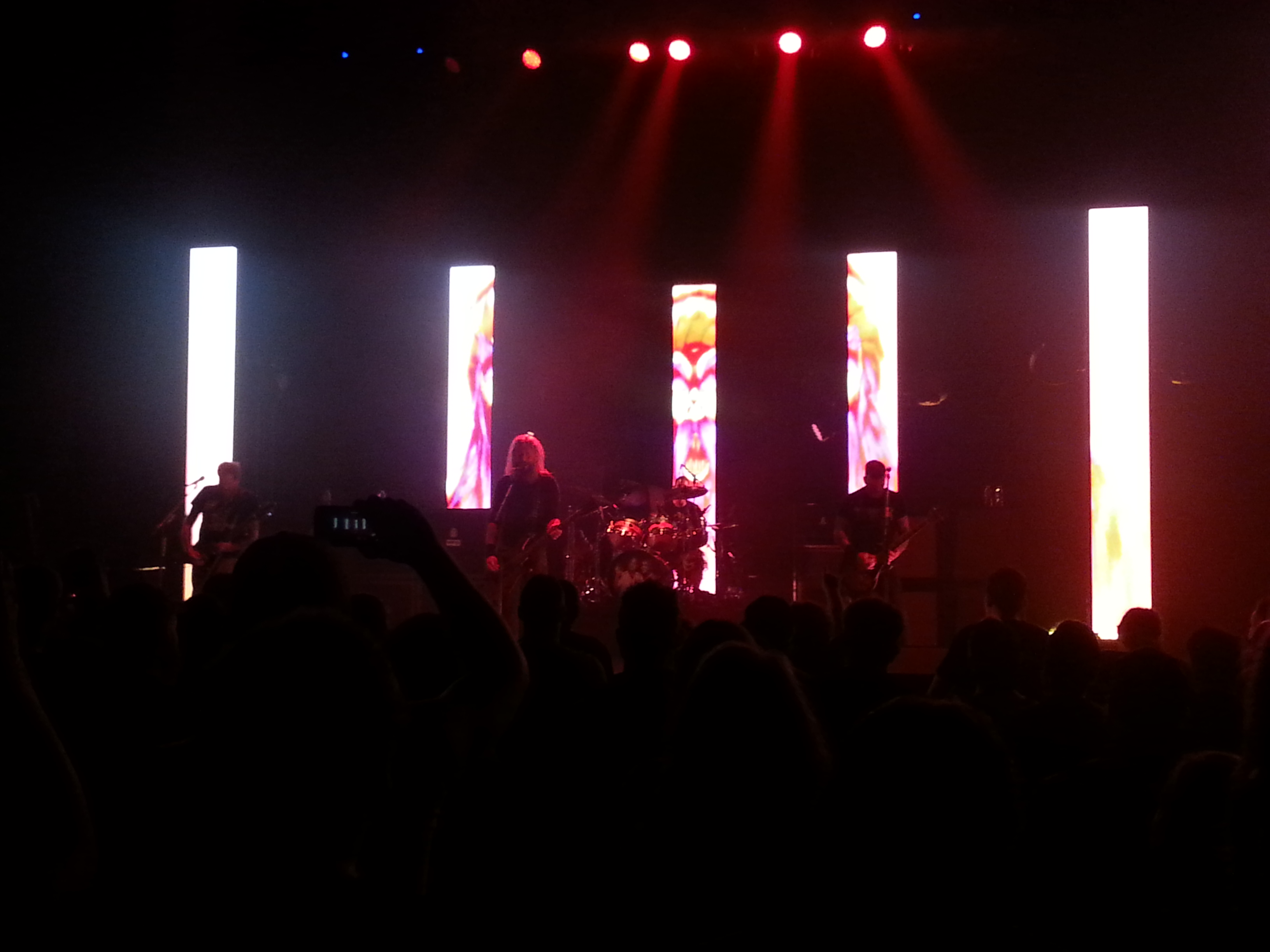 Unlike other shows this year, I didn’t get the chance to see the band after the show. After a set like that, I’m sure they were exhausted and very much in need of some rest. Though sitting outside the venue for as long as my friend and I did, we did get to see Troy Sanders wandering about. We also happened across Jesse Hughes while heading back to the venue from lunch. I am still kicking myself for not asking for a photo, but we did get to say hi. Russian Circles also passed us and gave us the nod of approval for her shirt from the last time she saw them live on the previous leg of the tour. One of the band’s techs even suggested a band to us, which we both thoroughly enjoyed while she was down for the weekend.

If these fantastic bands are coming to a city near you…Please, I implore you, spend the money if you can, and go see them all live! I’m looking forward to the next time I get to see Russian Circles, Eagles of Death Metal, and Mastodon! Be it together again, or on separate tours.

Pick up Russian Circle’s latest album Guidance.
Check out Eagles of Death Metal’s new live CD/DVD I Love You All The Time: Live at The Olympia in Paris.
Or check out the new Cold Dark Place EP by Mastodon over here!