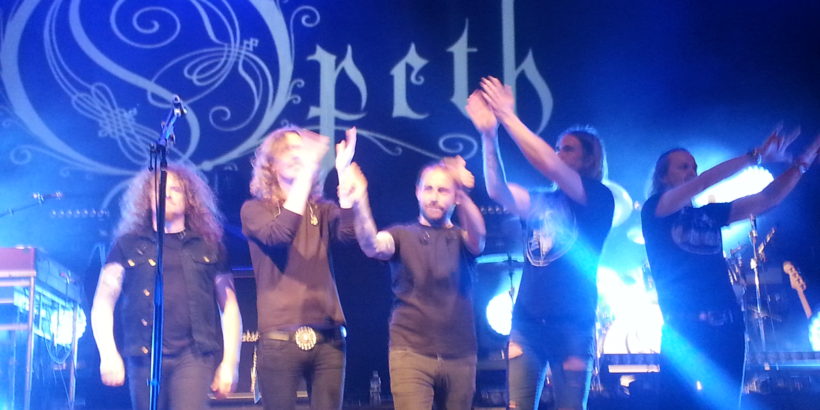 This past May 4, Our very own Concert Warrior Christina Pritchett went to Nashville to the Gojira / Opeth show at the War Memorial Auditorium. Christina went on to write a wonderful, detailed review of the show for your enjoyment.  For one reason or another, the review is presented now, several weeks late, but hey! Better late than never!  Here is Christina’s tale of mystery and imagination!  🙂

It’s been a few days since the Gojira and Opeth double headliner show at the War Memorial Auditorium in Nashville, Tennessee. Due to work, as well as still processing just how fantastic it was.

The venue itself is beautiful. The War Memorial Auditorium is nestled in a nice corner of the beautiful city of Nashville. Right beside its owners the Tennessee Performing Arts Center, and is right beside the State Capitol building. Statue stand as monuments to the fallen soldiers of many American wars, and has a history of many genres of music gracing its 2,200 capacity auditorium. 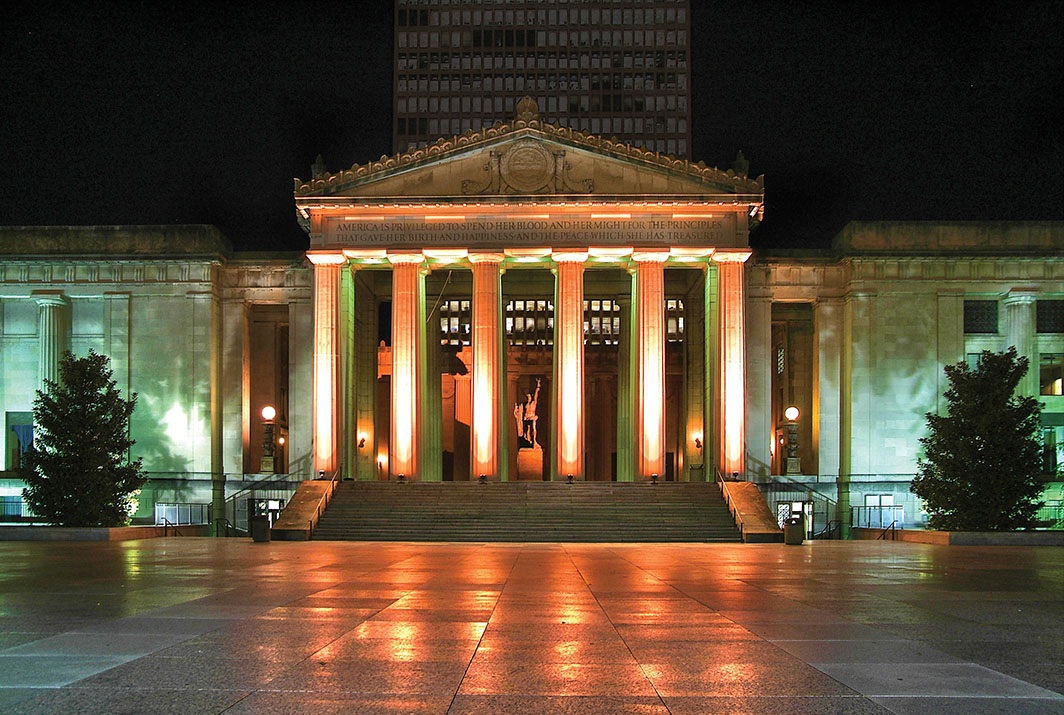 My friend and I arrived several hours early to the show, and made many a new friend while milling about in the light rain that attempted to put a damper on our day. From outside we could hear the soundcheck, and were graced with many a lovely tune from both headliners. This wasn’t Gojira’s first show of their Magma tour, but it was Opeth’s first for this leg of the Sorceress tour.

Once inside, we made our way quickly to the rail. The venue filling up quickly with people from all over the southeastern United States. Local metalheads and a group of six who had driven all the way from Arkansas to see the show. The set up was for Gojira to come on first, with Opeth’s equipment covered for the time being.

Gojira gave a strong open with a song from their latest album Magma titled. “Only Pain”. The lights and visuals behind the band accompanied the track in perfect syncronization. I’ve never seen Gojira (nor Opeth for that matter) live before, and only really knew of songs from Magma, L’Enfant Sauvage, and From Mars to Sirius. To be at the front of an energetic mosh of new fans and old alike was something I hadn’t experienced much before.

Playing plenty of music from their latest album (“Silvera”, “Stranded”, “The Shooting Star”), and several older songs (“L’Enfant Sauvage”, “Terra Inc.”). One that blew me out of the water was the performance of Flying Whales. One, never before have I heard a guitar sound like a whale. Two, that song is quite easily my favourite from their set that night. The energy changed in the room, amping up heavily, and drawing the crowd in. Mario Duplantier also had a lovely drum solo, showcasing just how bloody brilliant he is and treating us to a lovely time. They rounded out the set with the song “Pray”, which couldn’t have been a better ending to their half of the night.

There was an intermission between the two, of course. Set up for Opeth happening, as well as some technical difficulties with the wireless sets for Mikael and Fredrik’s guirars. Shout out to the poor guitar tech who looked like he was about to piss himself in fear from their tour manager. You did a damn good job. Sadly the delay cost some time, and a song (I found out later from Mikael himself) was cut from the setlist due to it. Quite alright, honestly, because Opeth…truly put themselves in my top three favourite live acts I have ever seen. 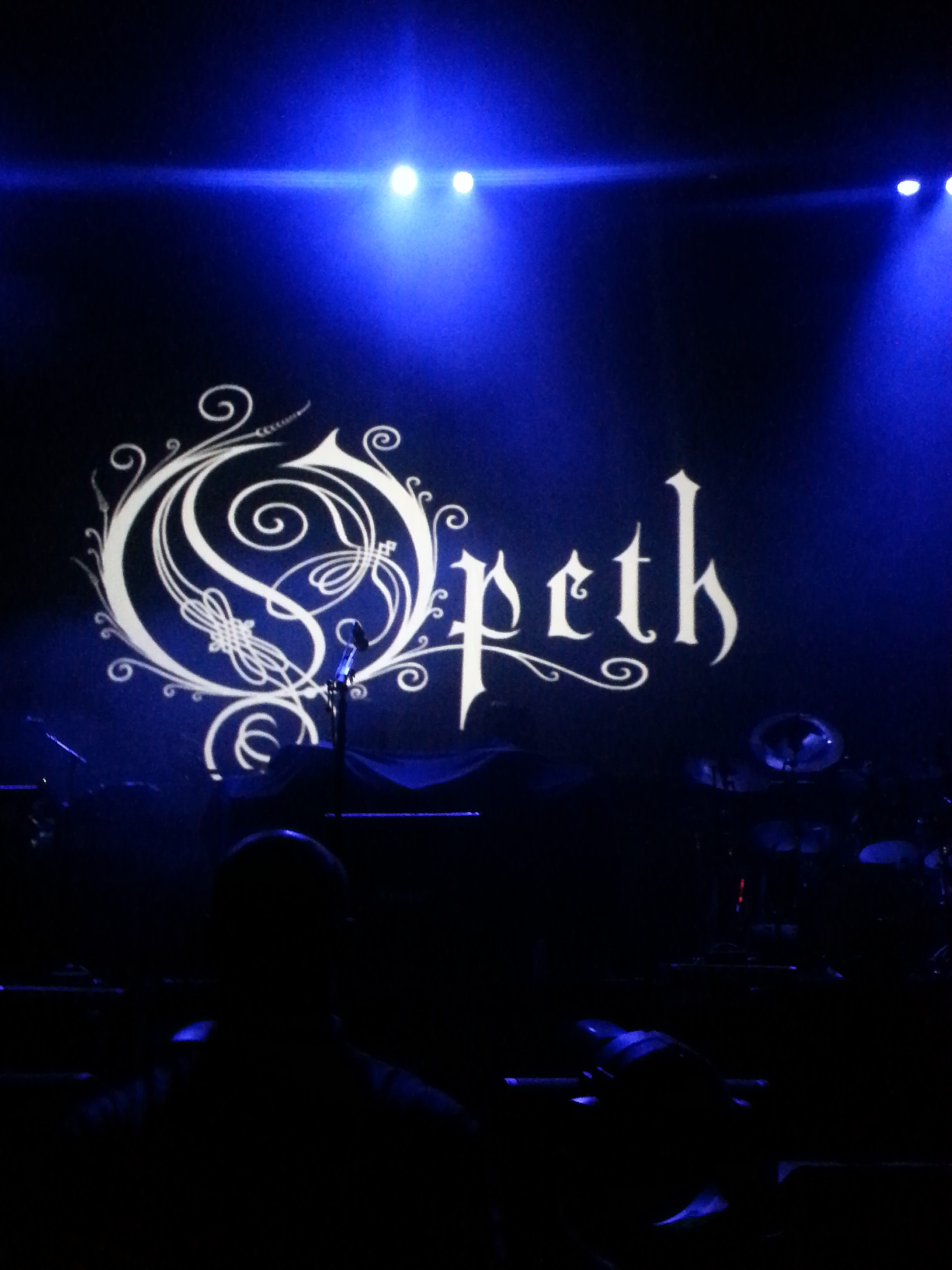 Opeth began the night on a strong foot, opening with the title track of their 2016 album Sorceress. Nothing compares to hearing it live. The visuals taken from the music video for the song behind the band, and each and every one of the members on point. From Mikael’s vocals, to Fredrik’s guitars, Mendez’s bass, Joakim’s keyboards, and Axe’s drumming. The night included many of their older songs, much to my personal surprise.

Songs such as “Ghost of Perdition” and “Demon of the Fall” on the list. Mikael may not growl on any of the newer albums (which you won’t hear me complaining about, fight me on my opinion, I dare you), but his growling is still fantastic even now. “In My Time of Need” brought tears to my eyes, being a song close to my own heart, and it was amusing to see the look on Mikael’s face when I yelled “Cusp of Eternity” as they were tuning for the very song. The band premiered the latest single from Sorceress live at the show, prefaced by Mikael stating it was the premire of the song and that “he had the lyrics right there, but couldn’t see them”. Stating he hoped he didn’t mess up. Not once did he. “Era” is made for being played live, in my opinion. It is a gorgeous song, and one that turned the crowd behind us into a surprisingly good mosh pit. The night was rounded out by “a very long song that just never ends” as Mikael put it jokingly. The song being “Deliverance” from the album of the same name. 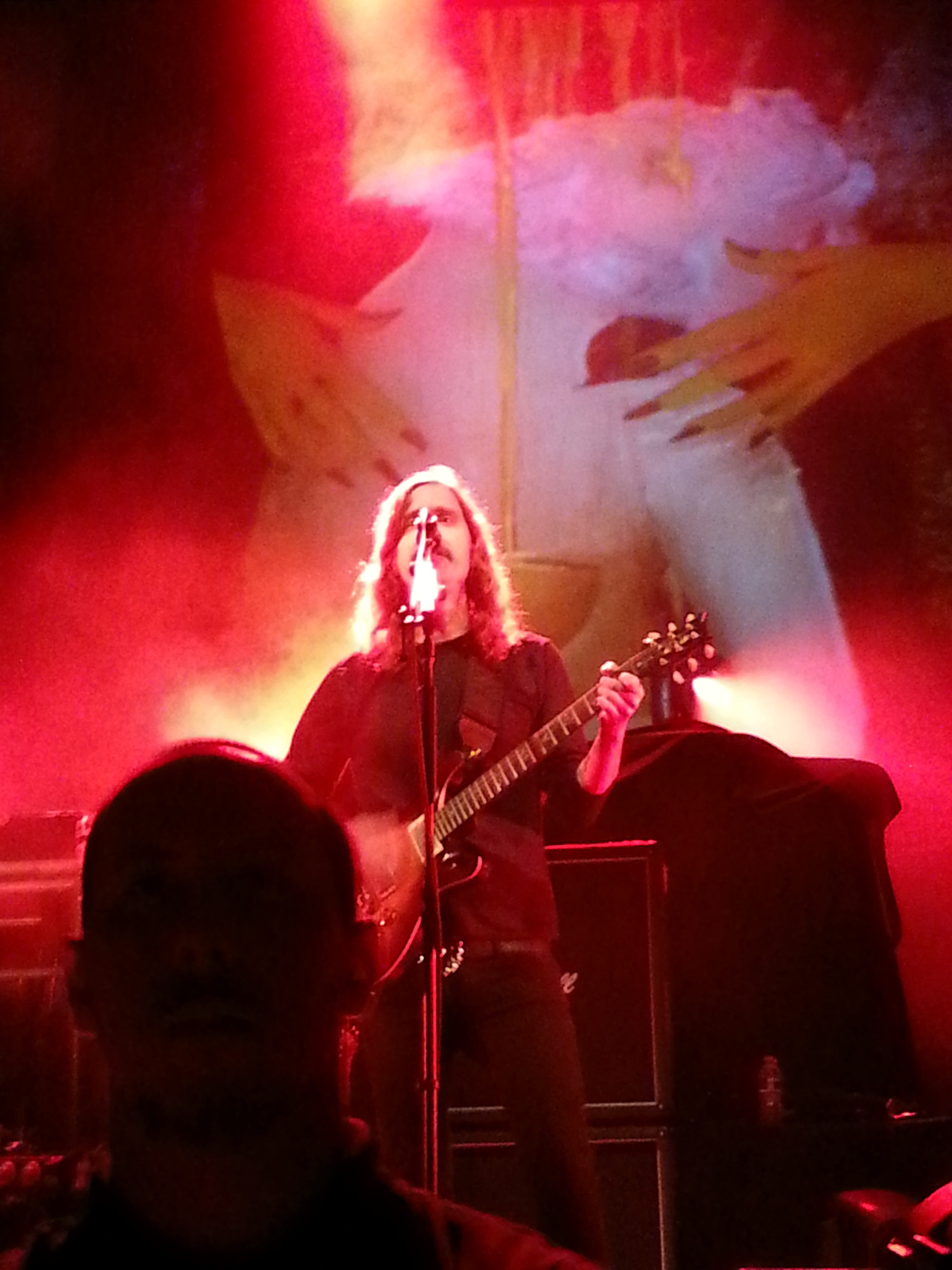 It was truly one of the best shows I have been to in my history of, well, going to concerts. It was the second one I had been to that week (the first being Sabaton with Leaves’ Eyes and Battle Beast up in Cleveland, Ohio with another friend), and has truly made it into my top three shows I have ever been to. My friend and I hung out after the show in the chilled southern night for a few hours. Meeting Joe Duplantier outside of the busses and talking for a bit. We also managed to speak with every member of Opeth as they came out. Mikael was humble, asking if we liked the show and even asked if we were upset by the delay. Admitting that they had to drop a song (I later found out was “Heir Apparent”) from the list due to the difficulty. Not one person was upset, only singing praises to the band when they asked how we liked it. He spoke with me about the Storm Corossion disk I had asked him to sign, and we talked about the artist behind it for a few minutes. Mikael even asked my friend, who has admitted it was her first metal show and Opeth show, if she would be seeing them again. A resounding yes, of course. Everyone else from the band was equally as kind and sweet as could be.

If you haven’t had the chance to see Gojira or Opeth live, I implore you…they are must see live bands. The energy they give to the crowd, the fans themselves giving back. It is a magical experience. Even if you’re on the rail fighting to keep your spot, and keeping people from falling through the crowd who decided to try and crowd surf. There’s never a bad seat in the house, at least at the War Memorial Auditorium. 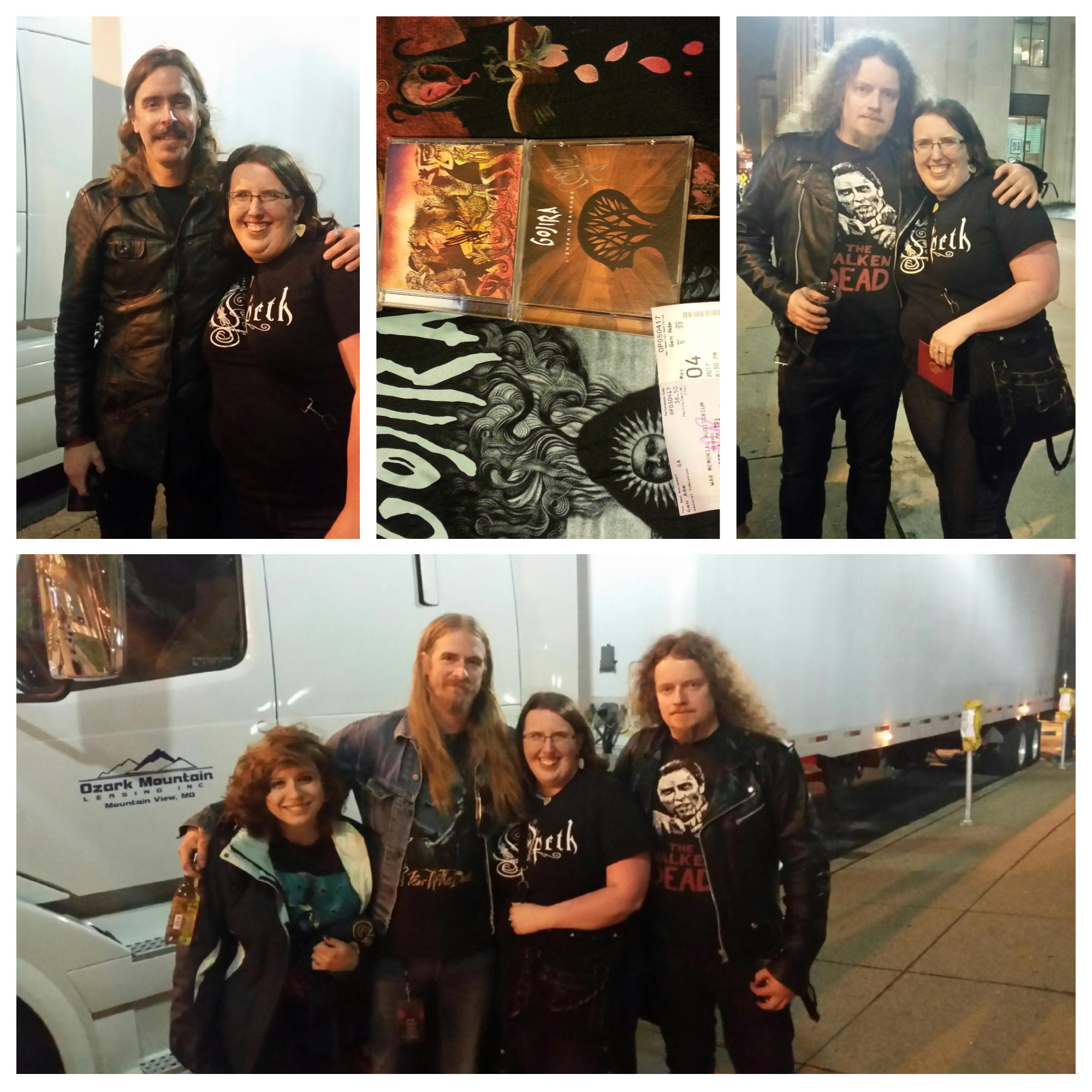 Christina hanging out with band members after the show!
—–
2017 World Prog-Nation – All rights reserved