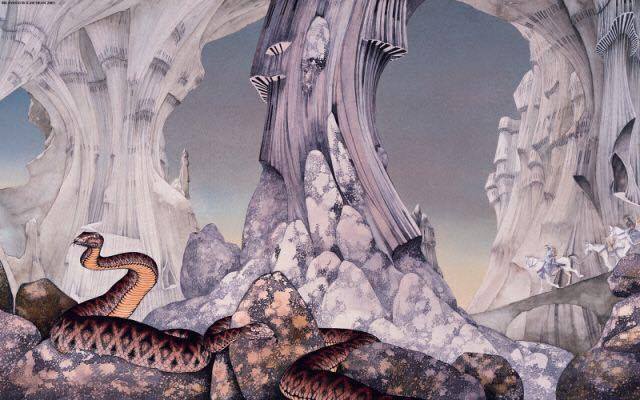 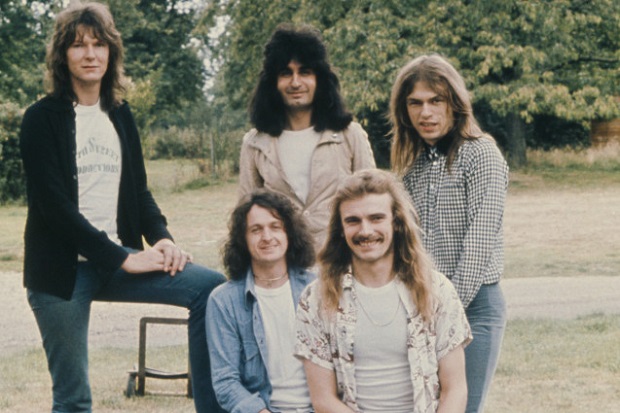 Following the overblown, pompous Tales From Topographic Oceans album, Yes underwent another personnel change. Feeling the band was going in a direction where he had nothing to offer (that being jazzy), Rick Wakeman quit and Yes recruited Swiss-born Patrick Moraz. He was much more in tune with what the band was going for on the 7th album which would become the underrated classic, Relayer. This album features some of the most erratic & powerful Yes music ever done. Following the formula of the Close To The Edge album, it only features three songs. The album’s centerpiece, Gates Of Delirium, clocks in at over 20 minutes, while the other two songs cover more that nine minutes each.
“Gates of Delirium” is based on the novel War and Peace and defines the title quite well. The first 7 minutes build up to what many can consider early prog-metal. The battle sequence has Howe and Moraz fighting it out for musical prominence while Squire and White do a fantastic job of holding it all together. At the 10 minute mark, the song completely shifts to a really crazy avant-garde war sequence, which also features some sound effects of swords clashing and general insanity (as only a war can prove). As this whole melee reaches a peak, you feel like you’re being thrown back and forth until it can’t be held together anymore and then it just erupts into one of the finest Moraz solos on the record….and gently fades out. The “Soon” section of Gates is considered by many to be one of the most beautiful, soaring sections Yes has ever done. Anderson’s vocals and Howe’s lap-steel guitar provide the tranquility needed after such an intense musical explosion. To me, this song is second to “Awaken” in the entire Yes catalog in terms of greatness and that’s a very close call indeed.
“Sound Chaser” is Yes on ‘roids. This song features Squire, Moraz, and Howe in a fisticuffs for center stage here. A true deep cut, this song was never played live after the Relayer tour and with good reason, if the band tried to play it today, they’d all keel over from exhaustion. Fast, intense, and psychotic, Howe once described it as a “madman from Hell.” Couldn’t disagree. This song is worth it not only for Squire’s bass playing, but also for Howe’s and Moraz’s insane soloing.
“To Be Over”: Another woefully underrated Yes Gem. Strong in content but mellow in attitude, this one reflects the Soon section of Gates. Peaceful and positive, it features an stunning Moraz section and fantastic Howe guitar (believe he used a Telecaster on most of this album)…..coinciding with the wonderful vocals as only Yes has, it is also in my top five Yes tracks. Howe recently returned this song to his solo shows after discovering in the early 90’s just how good this tune is. What took ya so long, Steve?
Sadly, this lineup would only record one album (but make many appearances on the collections of live Yes albums released over the years). After their 1976 tour, as the band were hunkering down to record the classic Going For The One, it was clear Moraz couldn’t deal with the egos and was gently eased out of Yes so Wakeman could return. Moraz said, “It was getting harder and harder for me to voice my opinions in the confines of the band.”
This album is my favorite Yes album. It has the most energy and schizoid feel of any Yes album. The good thing about it is that they never tried to duplicate it, making it a true one-of-a-kind Yes album. I always felt that Patrick Moraz is kinda given a raw deal in Yes. Wakeman is always the “best” keyboard player when mentioning the numerous Yes lineups and he IS a stud keyboard player, but I feel just from this album alone, Moraz could keep up with him with no problem. That being said, Patrick is a total jazz player and Going For The One really went back to a classical feel, which was right up Rick’s alley. But that’s a story for another time…..
Rating: 10/10
Thanx for reading!
—
Copyright 2016 World Prog-Nation